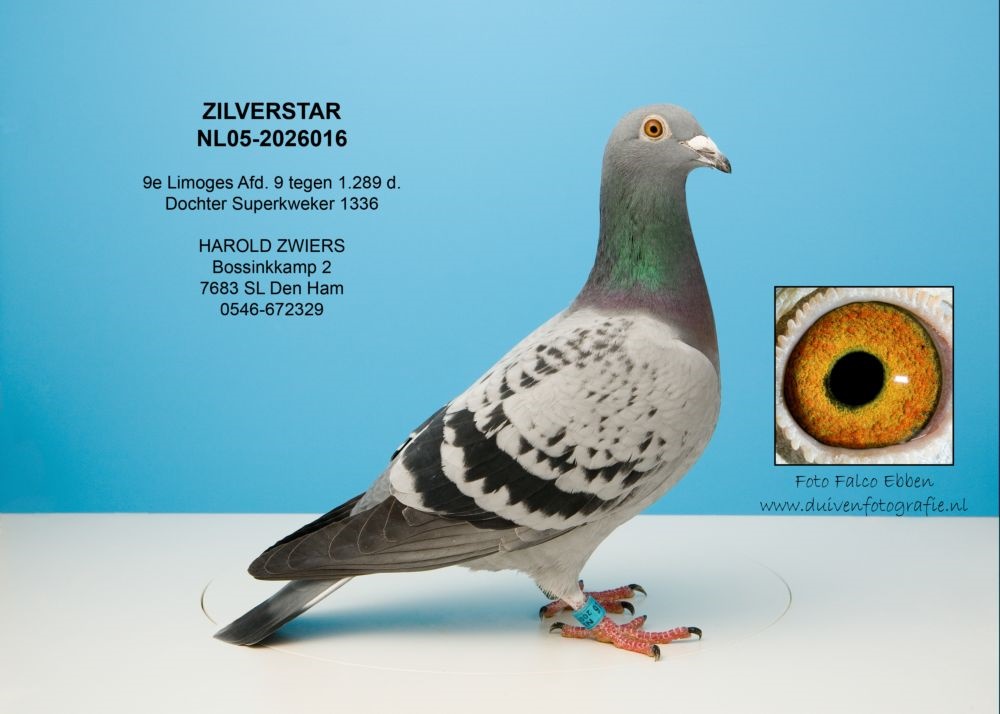 Seizoen 2007 with the flight Limoges become history. The settings for the Championships for the old flights can be formatted. Harold Zwiers (38) competed for the highest places in the rankings. This is not for the first time. Past year (2006) He won the Championship and he was designated winner of Mont de Marsan. Since the building of his new loft in 1997 is his star only increased. 1999 6e multi-day long-distance champion Section 9 with 2400 Members; 13e and the 12e appointed champion VNCC. Also 1e Brive by 537duiven Circle 1 Department 9 with the 98-2047038 (600-line Wim Derksen) Teletext entry NPO. 2000

Many enthusiasts look dubious if it goes about Limoges. Late in the season and often "fall again". Harold Zaidi makes on this flight often perfect results. This year was his Silver star, a young hen with ring number 05-2026016 that in 2007 the victory won in the. As a yearling flew this hen a 9e on Limoges in the Division against 1289 pigeons. "This year they remained On Bergerac unfortunately 15 minutes on the roof. She was in place to encourage 7.50 hours, But despite the delay, she played a 133e by 3209 pigeons in VNCC. I have given her on Perigueux, but that was, in fact, no long distance race ", Thus Harold. The "Silver star" comes from Harolds best breeding couple, in fact, a super breeding couple. From this couple also comes the "Yung Limo", the hen who last year Mont de Marsan on her name wrote. Cock of this pair is the 94-0071336 either the "1336" a pure Theelen containing still "the 510", "The vale Marathon" this "1336" is father of the 1e-1e-2e-4e-6e– price in VNCC; grandfather of the 3e-11e-23e– in VNCC and the grandfather of 1e-10e– in section 9 and 10 x 1e in association etc. Father of "Silver star" is this same ' 1336 "mother hen" is a "loan of Jan Magyar from Nijverdal and is a granddaughter to the" Perpignan "-hen from the loft of Jan Walpot (1e National Perpignan and also mother of the 2e National Barcelona). This is the story about Harold Zaidi. Once again congratulations on this wonderful victory. On to the party night in november.