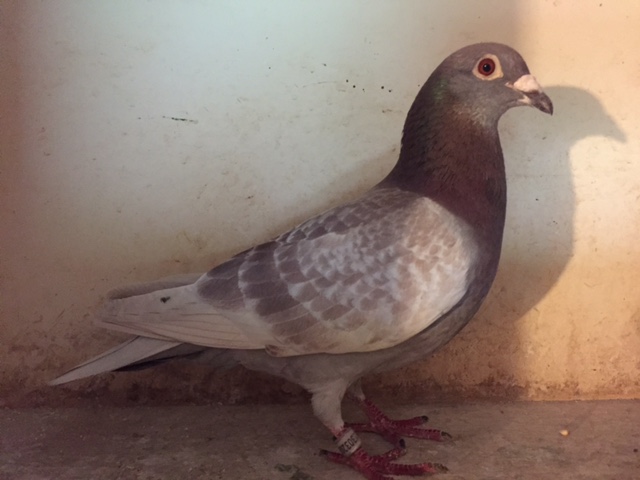 The Red widower Red Dawn 15.1303206 (2e get.) by Harald Zaidi (47) from the North of Almelo located Den Ham left the competition his tail with a speed of 1861 m/min. about 916 km. Harold plays predominantly as a marathon player with nest pigeons and preferably about 10 days eggs or on boy of 5 à 6 days. But due to circumstances came the winner as loose duller in the racing loft to sit and at one point his eye fell on a hen, where Zaidi much success with it as widow hen. The couple could find it so well with each other, that Harold she decided on widowhood continued to play, where the winner in the loft of the nest pigeons remained. Saturday morning wake up at half past four and Harold was derived from the reports of a Ruffec flight that the pigeons could fall all. He did the outside lights on and looked around. It started some light to be. Harold stood up 2 à 3 meters for the valve, When all of the sudden the winner after a lap of honour on the valve fell. He did this to the hokverlichting, after which the winner caught up over the antenna are loft. Harold: “It is quite an experience to something to do with it”. The Blue Hen of the winner, that last season was a 14th according national Cahors sector 3, arrived as a second Dove exactly five hours later to 9.12 you. The winner is bred from Super breeder Red Zaidi Jacobs (from breeding couple the 100% Jan Thelen , Buggenum duller the “1336” x Mahalakshmi 50% x Thelen 50% Jan Aarden hen) and from the daughter the Jan 3 by Arian Babu (Genemuiden).The racing pigeons sitting in a 13 m long garden shed, divided into 4 departments 2 departments for 12 respectively 2 departments for 8 fly couples and a section for the hens. Zaidi pigeon is for 90% built from the above mentioned stock couple crossed with pigeons from Arian Babu, purchased on its total sales in 2015 and in recent years with Jelle Jellema pigeons bred by. All marathon pigeons, in the beginning of the season 100 pieces go on the eennachts basket the basket in weekly flights. Then they are preferably at least once a week itself patched at least 100 km and then usually direction Germany. Because of the nuisance birds of prey near the lofts are the pigeons from the last long distance race confined until mid March the following year. There is only bred from the 24 breeding couples and from the best fly(Teletext) pigeons. The racing season starts with about a hundred boy. Medical only done something, when needed. In February all pigeons, also the breeders inoculated against paramyxo and in March against paratyphoid. This year got the racing pigeons for their first overnight flight on St. Vincent a yellow tablet (Baby Magic) pinned up on the advice of Jacob, because especially the yearlings had a bright yellow infection. The laggards, including the winner, were doorgekuurd a few more days. The breeders and boy are never treated against yellow. Those who select the get there is myself. If you keep doing this for years on end you get without saying a tribe who have little experience of the yellow, Thus Harald. The principle of Harald is as little as possible cures. Though he uses many natural products such as thyme tea against thick heads, Onion and DHP natural products. If feeding the pigeons are given Baez mixes, Wal Sons enter, Paddy, Jacob sports and Jacobs mix and candy seeds. Peanut & #8217; s , Sunflower seed and hemp they get for it to inflate the basketing. In early spring know Zain al which pigeons go on a certain large national race. But it depends on the condition, of course, wondering if they actually go along. Harald was also Grand Master last weekend at Perigueux. See elsewhere in this journal.