In other words: It is worth getting up early and that goes in this case certainly on for Harold Zaidi. Harold was waking up early on Saturday morning when he saw several reports on his phone, He was wide awake. At half past four soon out and outdoor lighting to done. Then is he against the Loft under the stand valklep, because you never know. The weather is still good, high cloud cover and wind behind. Celebrate something after, It is still dark he hears clearly a pigeon flying, which then lands on the edge of the valve, so not yet found. What to do now? Here comes the experience of Harold look around the corner, careful he opens the door of the loft and goes inside, does the interior lighting and the sizes of window opens very slowly. He sees the Red duller on the flap down and calls him gently and that runs in and gets to 04.12.46 found. You can well see that the pigeon is it then flew. The winning male Dove is a son of "Red Jacobs" the superbreeder in the Loft to the bossinkkamp in Den Ham. Last year injured come back, He lets see now fully recovered and achieves a beautiful victory and is even the fastest of the entire industry 3 National against 7000 pigeons. 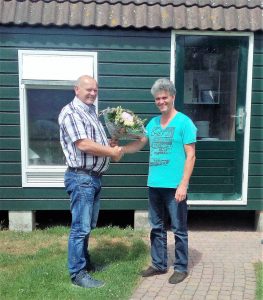