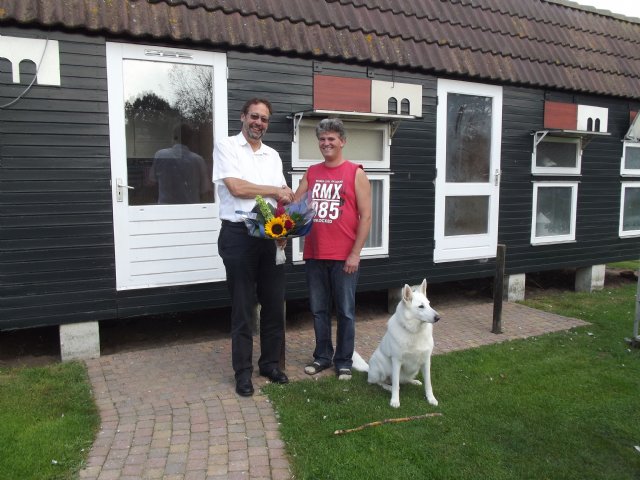 In the pigeon sport meet your people you can by one door, you have people where this is less goes well, but you still respects and sometimes you meet people you can call a friend. In the East of the country such a friend. Starting from 2008 we regularly contact, the phone calls are long ... with a break every 15 minutes (We understand this only) and pigeons moving van Den Ham to Veenendaal and vice versa. What was I happy when I heard that he, Harold Zaidi from Den Ham, the discharge was of the Foundation Marathon champion morning North. After I had called him congratulations I right Mike Fang and Patrick Sticker that I wanted to make the report and that was thankfully no problem. This topper from the area of which my dad says: (Beyond Zwolle) Netherlands holds on to exist (so quiet is it there). At a distance of 80 km more than we ... ... This topper beats everyone on the morning discharge and is the best of almost 300 Super good ZLU-players of the last years as Arjan Beens, Jelle Jellema, Cor Schermer, Nico Volkens, Comb. Van den Berg, Boogerd-Valenzuela, Team Vollebregt, Jan Peters, Thei Citizens, Jurrian van Amerongen, Jeffrey K, Vertelman and name all toppers but on from above the large rivers. He has them reports...... Harold chapeau !!! 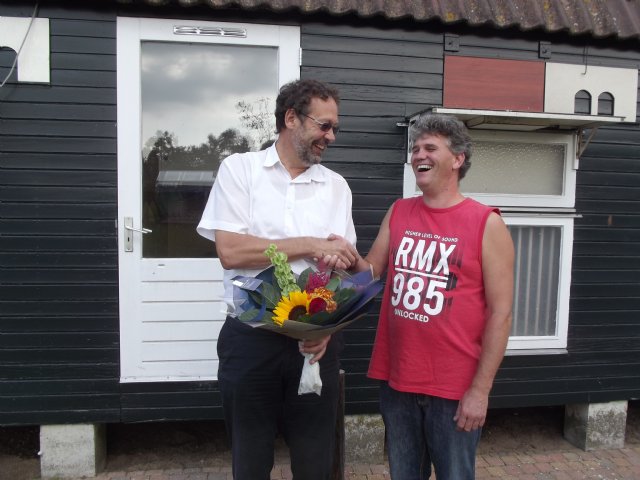 The lover
Harold Zaidi lives beautiful, just outside the village of Den Ham, near Vroomshoop and Vriezenveen. In the yard where he lives, was formerly a farm. There is almost 20 years ago a duplication House risen. One half is inhabited by the parents of Harold and the other half live Harold and Gerda. In the spacious grounds are a few pigeon lofts and a run. On one loft (13 metres) are the 40 racing pigeons and couples on the other loft (spacious 3 metres) are the 16 breedin. To the breeding loft is a spacious ren built for the approximately 80 boy. There is also a run since a few years, that Harold used to temporarily separate pigeons or doves in to do that go to a sales. Harold is 45 years young and since 1998 He has specialized in the Grand distance. Only the first afternoon releases and occasional Barcelona, but in recent years also the ZLU flights on the so-line. From the South-East Netherlands seen line. The successes stringing themselves to one. Is there a year in recent years several times a year on Teletext played. Thing remaining is a national victory, but which comes out every day a day closer as the health.

Collection of pigeons
The base of the pigeon by Harold consists of descendants of the top couple ' ' x ' Diana 1336. ' This couple is for the most part, indeed with the blood of the pigeons from Jan Theelen. ' The ' is totally a 1336 Theelen and ' Diana ' is 50% Tahir and the other half is daughter of the 1e wet. Perpignan by Jan Walpot and a son 1e wet. St. Vincent van Vinay. From this couple tribes almost all pigeons in the loft of Harold. Of course there is other blood through crossed. Especially the pigeons of Jelle Jellema do well against the pigeons from the breeding couple of Harold. But also the pigeons of Marcel Deeds from Didam, Arjan Beens, Gerrit and Jaco Villaflor (from Jo, 1e wet. Mont de Marsan and the top breeder Cabal Giant) are good crosses with the kind of Harold. At the best pigeon ZLU-is often The ' Scam ' in the blood. This cock himself performed very well, He won at Harold o. (a). the 1e Montauban in zone 3 of the NOW (5e National), but his descendants seem to be even better. "The Scam" comes from P. Saal from his best cock. Furthermore, Harold still some descendants of his old fondsoort from the beginning. These are of the because of via Anton ruitenberg. The pigeons of Harold you can features as super soft by plume, not big and not small with sparkling eyes. Eyes does Harold is not so much, He says, but he put like an old-fashioned ' Earthen-eye ' (Red-Brown, sometimes fur eye) at a staaloog. ' On a loft without steel eyes you will encounter in this time little top pigeons,' says Harold. I think he's right there.

System
Associate Harold for years at the end of december all his pigeons. The eggs of the growers and of the best racers be submitted, so he there 4 boy of has, Slackware. At the beginning of the spring has Harold than such a 80 boy grown. Before the preparations for the racing season begins, is the man from Den Ham finished growing and that is the purpose of the early growing. The pigeons are then in widowhood and are then placed on a litter for the various flights. Harold plays a lot on eggs, but there are also pigeons on boy played. Certainly at the end of the season is that useful to them well in the pens in baskets. At the beginning of the season the pigeons will be initiated with as many relatively short flights. That is why he'd rather basket during the week in on Duffel or Asse Zellik to get to the rhythm. If the long distance season is approaching, the racing pigeons at least twice a day 1,5 hours training. This makes the pigeons in a good condition to cope with the large long distance races. After the pigeons well underway have come from the short flights they go away with it towards the middle distance and if it fits a little further in the program. The pigeons get a good mixture of three brands enter supplemented to the long distance races with candy seeds, hemp, peanuts, TOVO and sunflower seed. As a result, the pigeons build enough reserves to cope with the heavy work. Medications are used as little as possible on the top loft van Ham. As a precaution the pigeons are given such a 4 weeks before the first overnight flight a further Yellow Spa and only something like them what fail. Pigeon friend and veterinarian Jelle Jellema is consulted as Harold not familiar, but he rarely need to intervene. Harold is pleased to, because he keeps his pigeons preferably as close as possible to the nature.

The pigeons that made him champion
For the Championship of the discharge of the Marathon Morning North count three flights: Barcelona, Marseille and Perpignan. On each flight has to be one of the first two comic pigeons are turned. The enthusiast with more points of these three pigeons is champion. Harold had a small but clear lead on Team Vollebregt from Wassenaar and the Amsterdam combination Boogaard and Valenzuela.
It began on Barcelona. Harold played the 17e National at a distance of 1.272 km and the 5e in the Marathon North. Later did this trick ' Mercy ' a daughter of ' Scam ' linked to a hen what a cross between Inbred black gold by Jacob and a breeding hen of the breeding couple ' ' x ' Diana 1336. ' The second Barcelona bird sat 46e in the Marathon North League. That was ' the Young Barcelona. ' This full brother of ' Mercy ' won a year earlier on the heavy Barcelona the 132e National. 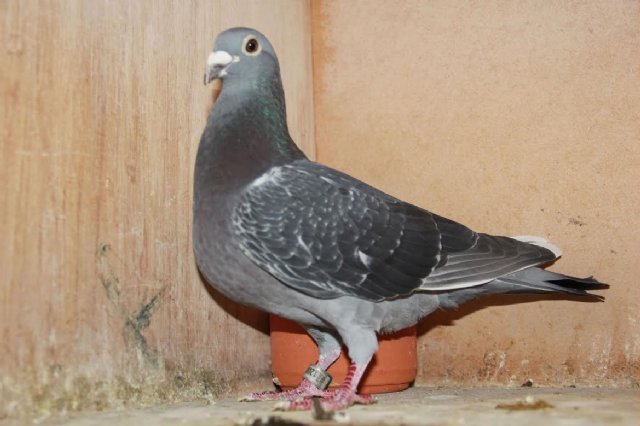 Above the Young Barcelona and Carlo below 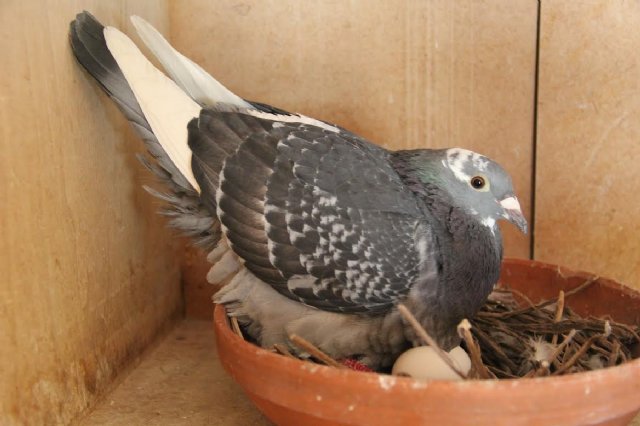 The second flight was Marseille. Harold won the 15e in the Marathon North. He played in the ZLU 100e National. The pigeon that was responsible for this is called Zorro. He is a son of Yung Limo (the best hen directly from the breeding couple with. the 10e wet. Mont de Marsan 2006) associated with the road warrior ' the Marathon. ' This father was especially seen on heavy flights above the 1.000 km. On the final flight Perpignan picked up ' the Young Barcelona ' the 33e price in Marathon North. The 240e National ZLU was his part in the. 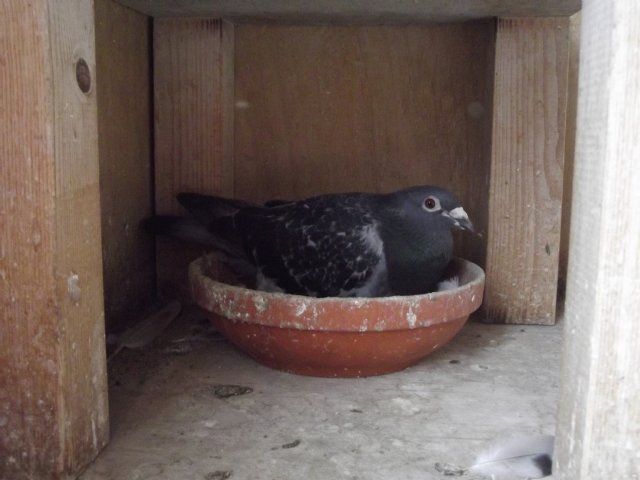 Finally,
The delegation of Marathon North (consisting of President Ad van Heijst, sponsor and driver of the day Hennie van Doorn and I as a reporter) have delicious a few hours about pigeon talk. The enthusiasm with which the man from Den Ham tells about his pigeons, is contagious. We are also treated to sandwiches at the coffee by the end of the morning. How can you duivenmelken make a half-day complete? Harold on behalf of the three of us thank you very much for the receipt and enjoy your Championship, because you have an army topmelkers reports and that is only possible if you own an even better topper are. Until the end of October in Hooglanderveen and personally: until the next phone call or the next chat.